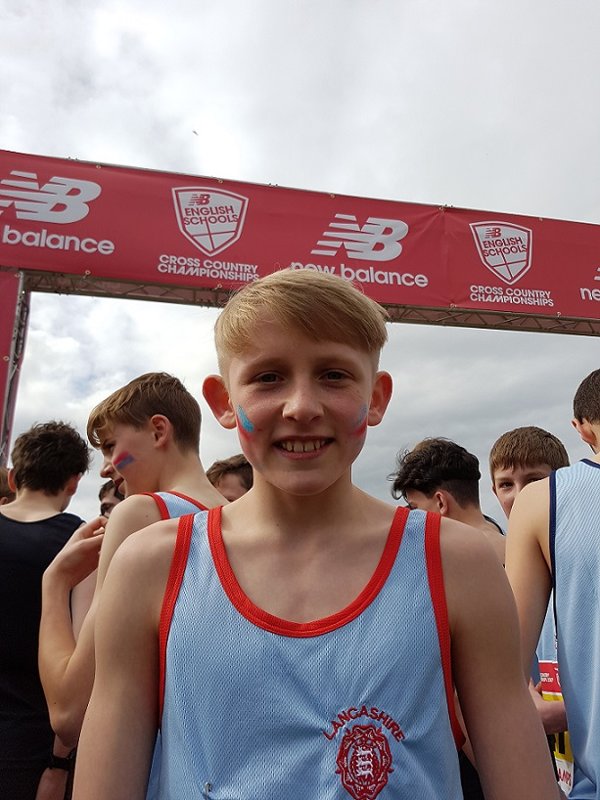 Year 8 student Ethan Warren was first reserve for the Lancashire Schools Junior Boys Cross Country Team and was drafted in at the last minute to replace an injured athlete.

This is the first time in at least seven years that a Balshaw’s student has competed at a national level of schools athletics for cross country. He travelled down to Norwich in Norfolk on Friday afternoon with the Lancashire Team and our very own Mr Mort and Miss Chisholm who are the Lancashire Schools Cross Country Team Managers.

On Saturday morning, the team had to travel a very short distance (by crossing the road from the hotel!) to the event which was held at the Norfolk Showground.

The weather was fairly mixed during the day with sunshine, cloudy skies and the occasional drizzle and a brief shower. Ethan’s race was at 1pm and he finished in 240th position (out of 345 finishers) with a time of 14 minutes and 27 seconds. His finish position was very respectable considering he was also racing against Year 9 students, as well as other Year 8 students, over the 4k distance.

The team travelled back on Saturday afternoon and arrived back in Lancashire quite late on Saturday evening.

Congratulations to Ethan and hopefully the event has given him a great experience and the determination to qualify again next year!

You can read more about the championships here. Ethan at the starting line for the race Ethan is pictured with Mr Mort and Miss Chisholm. Ethan and the Junior Boys Team Ethan with the Lancashire Team