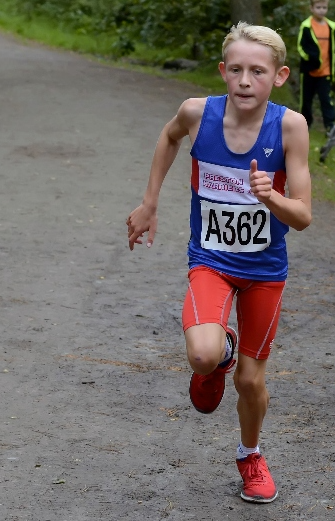 In late September 2016 Ethan Warren, in Year 8, and his Preston Harriers team won the U13 boys Northern Road Relay Championships held at the Sport City in Manchester.  The team competed against thirty other athletics clubs from all over the North of England.

This is a great achievement and follows on from their victory in the North West Road Relays at Delamere Forest earlier in September.

For those not familiar with Road Relays, you are a team of 3 each running 3km over 3 legs run on paths and trails. They are exciting races to watch with lots of action from start to finish as you see teams swapping positions throughout.

They are now going to test themselves against the best in the UK in the National Road Relay Championships which are being held at Sutton Park, Birmingham in October. Where they are hopeful of another strong performance and we’ll be sure to keep you updated on how he performs.

Thank you to Mr Warren for this report.

Well done to Ethan - we look forward to hearing more about your future competitions.

You can read more about Ethan's success here.